The science of Integrity and Aptitude Assessments has been developed by psychologists specially trained in the field of psychometrics. A psychometrist is responsible for the administration and scoring of psychological assessments. With the advent of online assessments, the administration of a well designed assessment can be accomplished quickly, usually in about 20 minutes. The results are given and validated in almost instantaneous fashion.

How will this benefit business people?

Let’s pretend for a moment that you’re the General Manager of a pro team in any sport and for the sake of example let’s say it’s a pro basketball team. Of course you’re always on the lookout for the next Michael Jordan and if you think the athlete you’re scouting is that good, you know it’s going to cost your organization a lot of money to sign him. Your investment and obligation will run into the millions of dollars and be for a number of years. You would like as much as possible to avoid a roll of the dice when determining the right player to spend your $$$$$$ on. 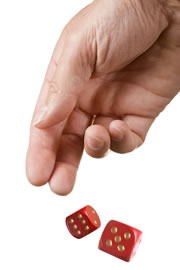 You know how good a player he is from an athletic standpoint because you’ve been scouting him for a long time in college
and you feel there’s a very good chance that he will be an excellent professional fit for your team. Based on your assessment
of his play at the college level and his physical type, you are willing to go forward and make him your number one draft
selection. Of course, you may be right or wrong in your athletic assessment of him and that’s a reasonable business risk.
However, what else could and should influence your decision? There’s a long list of criminal and socially improper activities
recorded by athletes in all major professional sports that has cost teams millions of dollars.

The Case of Ryan Leaf

For example, one of many costly mistakes made by pro sports teams occurred in pro football and it’s the case of Ryan Leaf. In 1998 the San Diego Chargers Football Team drafted a quarterback from Washington State University named Ryan Leaf. Mr. Leaf was judged by all who were deemed qualified to judge the talent of football players as an extraordinary talent, but there were some questions about his character. Maybe he was just a young fellow needing to mature a bit — or maybe not?

Mr. Leaf was drafted right behind the number one pick that year, Peyton Manning, who of course has gone on to become one of the all time greats of the game. Prior to signing Mr. Leaf to a long term multi million dollar contract, the then owner of the Chargers, Alex Spanos, tried to assess Mr. Leaf’s character by asking him this question:
“You aren’t going to cause any problems for us are you?” Predictably, Mr. Leaf responded by saying: No sir.” A OUIJA BOARD could likely have provided a more truthful result. The rest is history and most experts in the field agree that drafting Mr. Leaf was the biggest draft bust in the history of the NFL.

Mr. Spanos who was not born with a silver spoon in his mouth, was a man who began his business career by selling sandwiches to migrant workers in the Stockton, CA area and ultimately he built a world class construction enterprise. He threw a lot of his hard earned money away by giving so much of it to Mr. Leaf and that doesn’t even factor in the years it takes for a team to recover from a wasted top draft pick. You may visit the history of Mr. Leaf’s many transgressions at:
http://en.wikipedia.org/wiki/Ryan_Leaf

The Now & The Know

Nothing is fool proof, but now all NFL, NBA, NHL and MLB teams perform Integrity Assessments before they shell out the big dollars. The cost as provided by ESG is so reasonable that any size business can afford to do this with each and every person they hire. As a matter of fact, the cost is so reasonable; you can’t afford to not do it. It’s a quick online assessment to help determine what the future may bring and that could save your company many dollars and so much aggravation in the future.